McCue was retained to design and construct a sub slab depressurization system in an existing commercial building with underlying TCE vapour contamination located in Richmond, British Columbia. The system had to be installed with minimal disturbance to the existing tenants.

McCue conducted a pilot test that determined perimeter vapour collection points would adequately remove vapours from all areas of the building. Piping connected to purpose built wells installed by McCue was routed up walls and across the ceiling to avoid disturbing tenant operations on the floor. Exterior piping was hidden from view in the soffit. A system consisting of a fan and an activated carbon vessel was installed outside the building.

The system will protect workers inside the building from dangerous vapours for years to come. 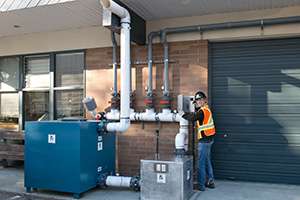