We designed and constructed custom wellheads, connected the wells to the pilot equipment using a combination of PVC piping and flexible hose, and performed the initial start-up of the system.

Operation and control of the pilot system was performed by the client following on-site training by McCue. The system was controlled using hand operated valves situated either in-line or on the blowers themselves. Air flow rates and radius of influence on surrounding wells were measured using 1 and 2 in-line orifice plates and differential pressure gauges supplied with McCue’s Pilot Test Kit.

System and field monitoring data obtained during the pilot trial demonstrated a high degree of applicability of AS/SVE technology to site specific conditions and the client subsequently consulted McCue on the design of a full scale system.

The full scale well network design included 17 nested purpose built AS/SVE wells with 10 of these nested pairs forming one network on the former retail site and 7 of them forming the second network on a downstream adjacent site. This layout was designed to permit individual management of the two sites from the source site.

We installed over 4,500 ft of piping in the construction of dedicated AS and SVE lines. The lines were connected to each of the AS and SVE wells via buried trench works. The dedicated lines were routed to the equipment shed area, brought above ground and plumbed together to form four manifolds: one AS and one SVE manifold for each of the two sites.

McCue met or exceeded all the site safety requirements of the property owner and completed the project ahead of schedule and under budget. 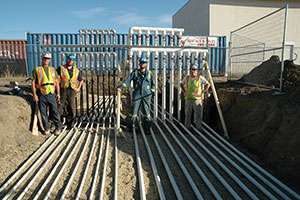 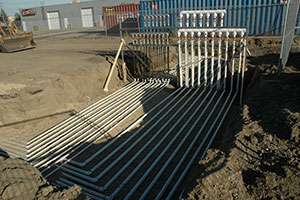 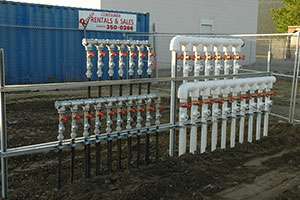