We were retained to supply and install equipment, piping, custom-built wellheads, and monitoring equipment for a one-week pilot test of multi phase extraction technology.

Some of the tasks we handled were:

We were subsequently retained to install a full-scale DPE system. We were responsible for coordinating sub-trades, excavating trenches for dewatering and vapour extraction piping, as well as restoring the trenched area.

We supplied and installed three pneumatic pumps and set three 24” square, bolted-down gasketed road boxes in concrete. We connected the three extraction wells to the treatment system via buried dedicated dewatering and vapour headers, and connected the treatment system discharge to the municipal sewer. We brought the system online and consulted with the client to optimize the system operation over the project lifecycle.

Following the successful remediation of the target site, we were retained to extend the system to an adjacent site. The extension comprised the connection of three new extraction wells spanning two operating commercial sites. The installation involved crossing a number of buried utilities, including water, gas and sewer, which had not been a factor in the initial construction phase. System construction was expedited to minimize the impact on the adjoining businesses. The existing system was down for a minimal amount of time during the installation, and the new piping was brought online within a week of breaking ground. The previously existing and new pipeworks were connected to separate headers, allowing for the gradual transition of system operations from both sites to the adjacent site.

McCue continued to provide ongoing system optimization and maintenance services until the completion of the project when we were hired to decommission the system. 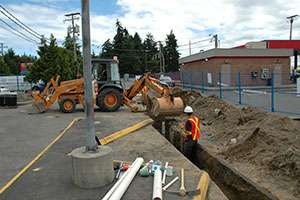 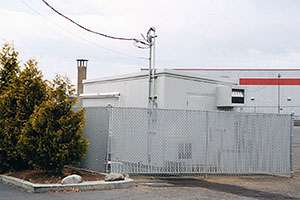 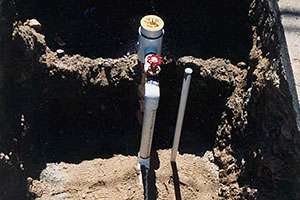