We were retained to design and install temporary pipe works for a sparge pilot project supplying compressed CO2 gas with the objective of lowering the pH of high pH groundwater at a Chlor Alkali Plant on Port of Vancouver land in British Columbia, Canada. The design included a tie-in into an existing pressurized CO2 tank utilized in plant processes. The tank supplied CO2 gas at a maximum rate of 650 kg/hour at pressures around 300 psi. CO2 pressure supplied to the sparge system was controlled by a regulator that we installed downstream of the tie-in. As a fail safe measure a pressure relief valve set at 150% of sparge break-through pressure was installed inline and upstream of the temporary sparge piping.

Our sparge piping network consisted of pressure rated hose routed to a custom built 3 point steel manifold connected to the test sparge wells. 400 feet of hose was installed on an existing overhead pipe rack and through an active plant building to a manifold consisting of pressure regulators, gauges and flow control valves. The manifold was designed to allow the sparge wells to be individually controlled while running a combined test during the pilot trial. CO2 flow rates were measured using 1″ and 2″ in-line orifice plates and a range of differential pressure gauges supplied as part of McCue’s Pilot Test Kit. Our design and installed piping network was reviewed and inspected by Plant Health & Safety and Operations personnel prior to start-up and met all plant safety and operational requirements.

The pilot test was successful and we were subsequently consulted on the design of a full scale CO2 sparge system consisting of a 4-well sparge network with buried pipe works. 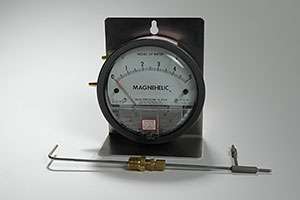