McCue was contracted to install and operate a modular water treatment system on a ship to treat water at sea.

The treatment system separates water from oil pumped out of a sunken ship off the coast of Newfoundland. The Liberian-flagged MV Manolis L, carrying a load of paper, ran aground on Blowhard Rocks and sank near Change Islands in Notre Dame Bay, Newfoundland on January 15, 1985. The vessel lies in approximately 82 metres of water and contained approximately 462 tons of oil and 60 tons of diesel when it went under.

Fuel in the ship was staying put until a storm in 2013, when fuel started to show up on the surface of the ocean above the wreck. To prevent further leaks and the threat of pollution from the wreck, the remaining oil aboard the Manolis L had to be removed from the sunken ship.

McCue was part of Ardent Global’s team on the project, which was administered by the Canadian Coast Guard. Our operators worked and lived with the crew and other specialized contractors on board the ship while work commenced. In addition to work on a ship at sea, one of the great challenges of this project was water quality, which was a mixture of salt water, sand, mud and heated oil.

No challenge is too complex! Send us your water problems! 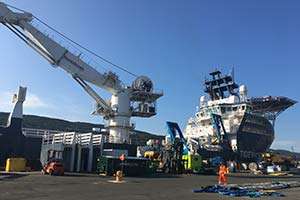 Working in the Port of St John's to construct a water treatment system to treat oily water recovered from a sunken ship off the coast of Newfoundland, Canada 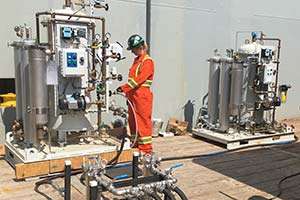 McCue's operator on deck to treat oily water recovered from a sunken ship off the coast of Newfoundland, Canada