We were retained by the refinery’s environmental consultant to provide design drawings for an air sparge system to treat groundwater on a bench of land below a refinery located in British Columbia, Canada. We prepared P&ID drawings and specified equipment and hoses in accordance with refinery requirements. Afterward, we procured a custom built sparge unit for the refinery that was lifted by crane onto the lower bench. The sparge unit includes five automated solenoid valves so that air sparging of 5 well pairs can be pulsed according to a sequence pre-programmed by the refinery’s environmental consultant.

Based on the success of the previous sparge system, we were once again retained to design and build a second, significantly larger sparge system in a different area of the refinery. The installation of the piping network, which included 4000 feet of piping, involved a significant excavation and the frequent crossing of buried refinery piping. Our crews underwent additional health and safety training at the refinery and completed the excavation work without incident. Buried piping was connected to above ground manifolds, which were connected to a second custom-built sparge unit supplied by us.

We continue to conduct ongoing operational support for this equipment. 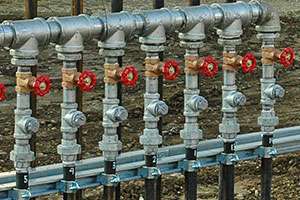